I had already started writing this post when three students came into my study hall asking if they could survey some of the kids in the room.  As they circulated among the class and asked their questions, it became harder and harder for me to simply sit quietly and listen.  The survey was on racism in America today, and in my eavesdropping I caught wave upon wave of the naiveté that inspired me to write this post in the first place.  These kids have good lives.  Their families are well off.  Aside from the handful of Korean exchange students, our school doesn’t have much in the way of diversity.  They’ve never seen the impact of racism in action – which led them to conclude that racism is now a non-issue.  I cringed inwardly, already mulling over ideas for bringing up the topic in class some time.

I love my job.  I love this demographic, though not always for the reasons people expect.  For the most part, my students are awesome – respectful, trustworthy, and motivated.  But man, they’re naive.

To my students, if any of you find your way to this blog, please know that I don’t mean to discredit your life experiences.  Some life problems cross the cultural, financial, and racial boundaries to touch us all.  I know that some of you face struggles and issues that others don’t understand.  This is one of the reasons I want to teach you – because you need someone to both challenge and support you as you deal with your unique circumstances.  But you don’t know how the world at large works, either.  How could you?  You haven’t seen it.

This beautiful, thriving pocket of the Midwest is not representative of the rest of the world (or even the rest of America), and so far my students haven’t had to shoulder much of life’s responsibilities. They don’t know the potential consequences of their decisions.  They don’t know when their words don’t match their intentions.

Study hall kids often complain about how they don’t like it when their parents ask about their day.  I haven’t done it yet, but I want to ask them if they’d prefer the alternative.  Would they rather have parents who don’t ask how their kids are doing and aren’t interested in their day, their grades, and (essentially) their lives?  I’ve seen those parents.  That isn’t the kind of life they want. 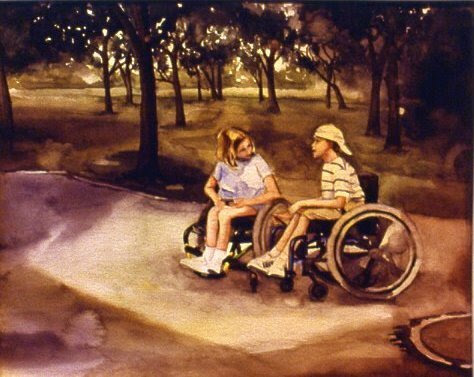 The picture above my desk, painted by my sister.

A group of kids in my room were making jokes about a range of birth defects, from dwarfism to cerebral palsy.  As I sat watching them, one of their classmates approached my desk shaking his head, asking how I dealt with teenagers all day.  I talked with him for a bit about the challenges of being a high school teacher, but even as he thought he was commiserating with me, he didn’t fully get it.  I told him about strategies I use to converse with teenagers, but he didn’t pick up on the fact that I was employing those same strategies with him, too.  It amused me a little.  Even those who are aware of teenage immaturity don’t always see it in themselves.  He was giving me “knowing” looks with an air of superiority.  At least I’m not like those kids, he seemed to imply.  Near the end of our conversation, I pointed to a painting hanging near my desk, showing a boy and a girl both in wheelchairs.  “That’s my brother,” I said.  He swallowed as he looked back over his classmates, still engaged in their irreverent conversation about people with physical impairments.  Then he looked back at me with wide eyes.  He’d known that what they were saying was wrong, but in that moment he realized the true impact of their words.

I hear inappropriate comments like these all day.  I could tell stories of the flippant comments I’ve heard (and addressed) about poverty, rape, and unemployment.  They lack the empathy to understand their own words.  They usually hear me out, though, as I explain why those jokes aren’t OK.  In one case, a girl took the initiative of approaching my desk and apologizing, sincerely letting me know how bad she felt for what she’d said.  They’re learning, so that’s all I can ask.  But even so, their ignorance about racism is the most overwhelming. To them, racism is a topic for history books and sociology projects, not a reality of the modern world.  Out of sight, out of mind, right?  It’s so far removed from them that they think it’s OK to laugh and make public jokes about it.  They aren’t malicious, intending to hurt others, but they are naive.  Blindly, frighteningly naive.

They haven’t seen racism in action.  They haven’t lived in a world where it’s real and dealt with every single day.  They don’t understand that this hatred and pain isn’t gone from our country.  As I spoke to one class, I asked if any of them had ever seen racism in action.  “Oh yeah!  I have this friend who is so racist!” they called out, laughing a little.  “No,” I replied, “I mean have you ever seen the other side of it, ever seen someone who’s been hurt by racism?”  They silenced, like they hadn’t even considered the situation from that perspective.  With another class, I had to address some boys with an idea for a joke that made my stomach turn.  They hadn’t gone public with it yet, but they had plans.  The joke seemed innocent to them, but if carried out, it could have potentially cost them college admission or a job in the future.  It was that serious.  In that moment their naiveté became a serious problem.  The consequences of their actions wouldn’t go away just because they didn’t understand.  Fortunately, they listened when I admonished them, when I explained that there are some lines that you just don’t cross.  Ever.  No matter how light-hearted your intentions.  I doubt they’ll ever fully “get it” until they see reality for themselves, but they did change their minds.  They chose not to follow through with their “joke.”

Like I said, my students are good kids.  Privileged, yes.  Oblivious to certain real-world issues, clearly.  But did you notice?  When I spoke to them and explained things, they responded well.  The problem is naiveté, not bad intentions.  And while I don’t condone their ignorance, I understand how it happened.  The contrast of this Midwestern suburbia to cities like Washington DC, Boston, and Miami is a bit staggering sometimes, so maybe I would notice the problem less if I hadn’t spent all those years seeing the various corners of our country.  My students haven’t had that chance.

Let me end on this.  While I see the differences, I don’t want to go down the path of saying “these kids don’t know how good they have it.”  While there is an element of truth to that statement, there’s also an element of belittlement.  Yes, they are naive to the rest of the world, but they also encounter struggles that the world doesn’t see.  I’ve been immersed in the private school environment for a long time, and I’ve seen it from a lot of different angles.  I’ve seen the messes that get swept under the rug in an effort to keep up appearances.  I blend in well enough with this environment that they’ll listen to me, but I’ve seen enough of the rest of the world to know where we fall short.  This is why I want to teach this demographic – not because of their affluence or polite manners, but my desire to reach through all that and meet them where they are, not where people assume they should be.  There is so much more to them than their nice lives and naiveté.

17 thoughts on “Dealing with Naiveté”

© Christine Roberson and Avoiding Neverland, 2012-2017. Unauthorized use and/or duplication of this material without express and written permission from this blog’s author and/or owner is strictly prohibited. Excerpts and links may be used, provided that full and clear credit is given to Christine Roberson and Avoiding Neverland with appropriate and specific direction to the original content.